hey hi hello. i feel like i’ve been a bit distant on here so i wanted to do a bit deeper post that just kinda talks about a life. in today’s post i’m going to be sharing ten things i’ve been learning, i’ve done this a few times in podcast form after listening to kenzie elizabeth’s episodes on it and i thought i would do it in blog form too. also fun fact some of my first post that people really started reading was my 13 things i learned at 13!

1. your original plan isn’t always what’s right for you

recently, multiple things that i never thought would happen have happened and they were not my original plan at all. things are always changing and something that may have been the right fit at some point in your life and aren’t anymore and that’s okay! almost always, if you just stay positive the situation will work out in the end and won’t be worth the stress.

2. ask before rather than ask for forgiveness later

this is another thing i’ve really seen lately and that is even if you think someone is fine with something, just ask before. you may think it’s fine but if even in the slightest you think they could be upset by something, simply ask before you do it. therefore you won’t have any guilt or blame on you if it creates a problem because you asked. it’s also so much less stressful because you don’t have to worry about conflict. the best thing for your life is just to avoid conflict in every aspect of your life and asking if you think someone may be offended or upset by something.

3. nothing that brings you down should stay in your life

this applies to people, activities, thoughts, and basically everything else. you want to create a life that makes you happy and things that don’t contribute to that need to leave! sometimes you can’t completely get rid of something but if it’s something you can’t get rid of, try and make it more positive and find ways to make it better. for example if school really brings you down, maybe try and look into online classes or listening to music at school cause that can really boost your mood.

4. if there’s a problem address it, always

if there’s a problem, it isn’t going to resolve unless you do something about it and address it. it’s much easier to try and push the problem away but it’s just going to come back. the longer you ignore a problem and don’t address it, it’s just going to grow and make it more intimidating to deal with. if you’re behind in classwork, make a catch up day, it’s just going to grow. if you’re having issues communicating with someone you care about or something they’re doing is upsetting you, tell them (nicely obviously) but nothing is going to change if they don’t know what they are doing and it goes both ways.

5. you’re your own biggest critic

6. what content you absorb effects your life more than you know

everyone reading this has a phone or computer and uses the internet. if you’re anything like me, you’re likely on your phone and absorbing content throughout the day, everyday. now i’m not going to go off about less screen time cause i need to work on that one too… but what you are seeing when you’re on it is the most important piece. this is about who you follow, what you watch, what you listen to, etc. follow accounts that inspire you and boost your food, not make you insecure. same thing for podcasts, youtube, blogs, etc. lastly in terms of text/snap, if somebody is bringing you down, don’t feel like you need to text them, you’re on your own time.

7. don’t be naive or make excuses for others

so much of the time people want to give people the benefit of the doubt but i think it’s really overdone. i catch myself making excuses for other people because i don’t want to get hurt and they don’t deserve that second, third, fourth chance. be smart with when you give the benefit of the doubt but if you have to make excuses for someone, really, really think that one through. don’t ignore the signs that you aren’t being treated the way you should be.

this can apply to literally anything. don’t force a connection with someone if it’s just not there, that person isn’t the right fit for you. this can also apply to something you want to do, sometimes there’s a reason something shouldn’t happen and listen to the signs and don’t force things. especially with people, if they aren’t vibing with you, don’t continue to try and force it.

10. the best thing you can do is stay lowkey

don’t be problematic !! ever !! this will only create unnecessary stress and negativity you don’t need in your life. when you stay lowkey and unproblematic, your life will be so much more relaxed and have so much less toxins. especially with people you aren’t comfortable with, if you don’t trust them or know them well, it’s always better just to be there and nice but not start anything especially if you have anxiety.

i hope you enjoyed this post and have a great week! 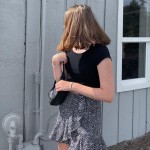